Quality in the connected World 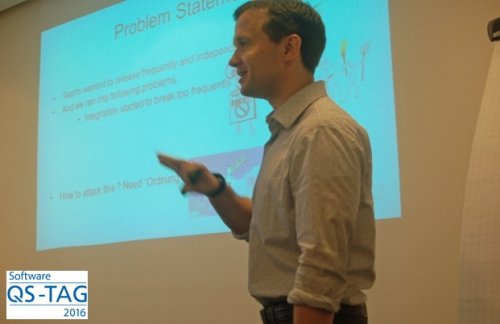 Valeriy presented a unique story of their experience in Agile. The challenge of working with many teams in agile, each moving with its own speed, in a distributed testing organization, using different technologies, that has presented its impact on Avira.

This situation is not unique, as many companies today face similar conditions. So what is unique? The way to solve and overcome the situation, bring teams into coordination and have them working together, leveraging knowledge,  sharing it, and building a specific agile mindset and culture, integrated with the CI, to resolve and accelerate release from each team.

Avira went through a few steps, first made each team responsible for their own quality. Having developers in charge of testing their own code developed, and separating the E2E tests. Also they have built a QA community, and started giving seminars, and sharing knowledge and experience. They have then, smoothened the path to production, going through Dev, Test, Acc and prod path, where Dev – each developer tested their own code, test – integrated into CI and did application specific testing, acceptance – doing integration testing (staging environment), and into production.

Key factor was to make teams being able to ship at their will, and using less acceptance tests and more application specific tests as their core tests for production.

The next step was to implement the E2E tests, in a separate activity. Emphasized more on automated testing for integration and E2E tests.

The whole process was led by a quality strategy that was re-thought ahead of time, for implementing all of these steps phase by phase and having quality goals for each phase.

They have adjusted their agile planning. From product vision, to product roadmap, release planning, iteration planning and down to daily planning.

The trick that worked for Avira (and which was a struggle...), was to balance between the alignment of teams and flexibility of shipping individually. In parallel, they have built an agile community, via bio-weekly agile seminars & inspiration sessions, and having a platform for sharing ideas, experiences, and knowledge being transformed to others when they had success with something or had to fix and adjust something.

A lot can be learned from this experience and story, and again - embracing a new agile mindset, combined with knowledge sharing and building up communities-  has proven to be the right method for success together with the focus on automated tests during integration phase, while putting more and more effort into application specific, and on dev tests in early stages.

Thank you and good luck Valeriy!

Note: The story and experience was shared during the QS-TAG 2016 conference, in Nuremberg, one of the most successful conferences in past years in Germany, emphasizing (this year) – “Testing properly - Testing what matters”. Imbus, an international testing services, test automation tools provider, and a training company (Germany, Kosovo, China) is the conference organizer. Lately, Imbus has also achieved the ISTQB® Global Partner status for certifying many of its testers using the ISTQB® Scheme worldwide.